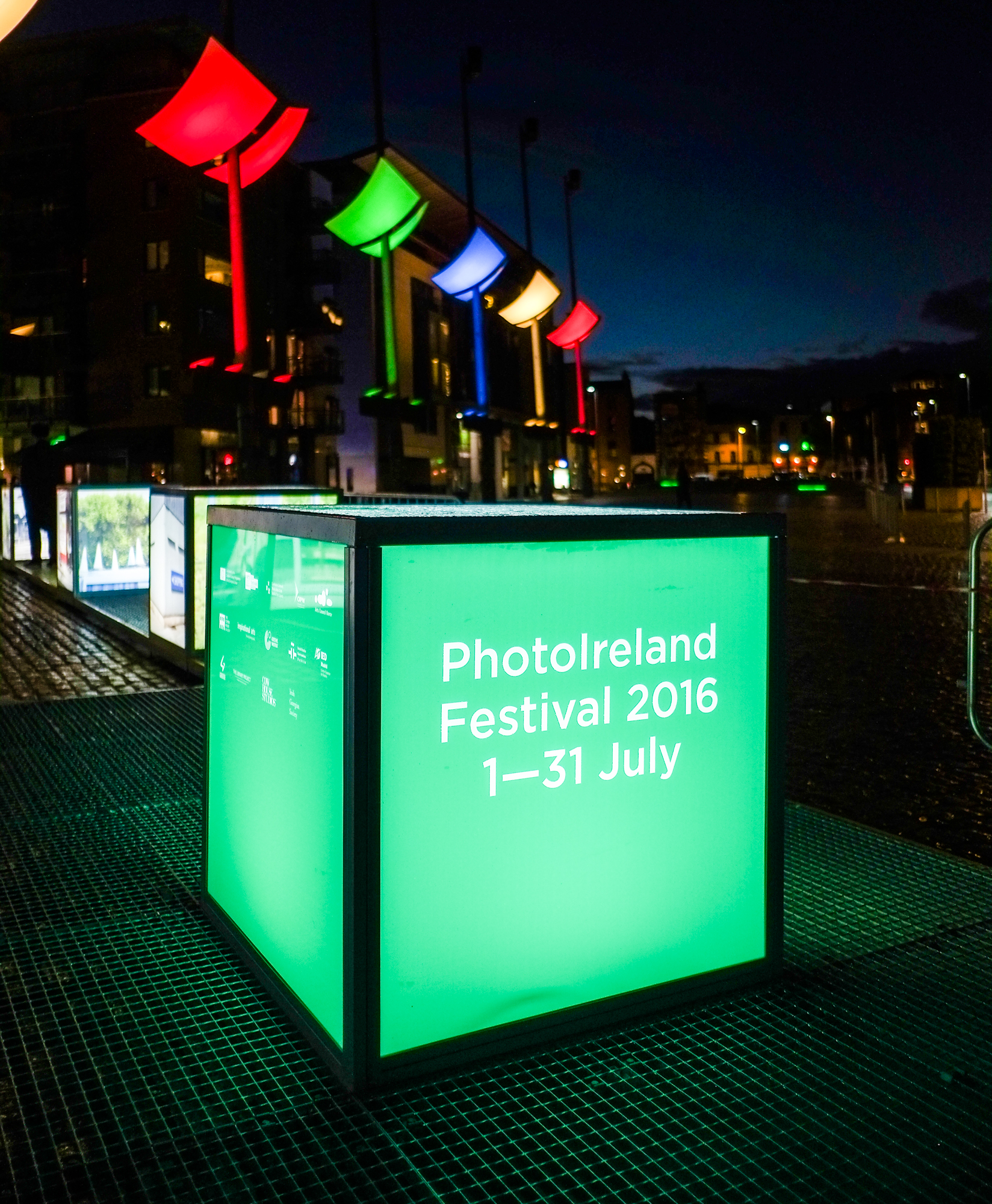 As part of the 7th edition of PhotoIreland Festival, Flâneur By Dublin brings to the streets of Ireland’s capital the commissioned works of two great contemporary photographers. Displayed in a series of large cubes, their work disperses over a metal pathway installed in Smithfield Square. These large cubes become lightboxes at dusk, creating a unique display and extending the enjoyment of this open-air gallery throughout the night.

The two selected artists for Flâneur By Dublin are Esther Teichmann (DE) and Rik Moran (UK). They both enjoyed a residency in Ireland earlier this year, engaging with the urban and rural landscape, and producing the present body of work.

Flâneur By Dublin is part of a larger project called Flâneur – New Urban Narratives. This is a new, European Union funded, 2 year long project, transforming photographers into flâneurs and requesting them to apply a new approach to their work within the urban territory. The project involves an international network of some 20 organisations from 11 different countries, and it will be presented in the 13 partner cities.

You can find out more about Flâneur – New Urban Narratives  here.

About Esther Teichmann
German/ American artist Esther Teichmann (b.1980) received an MA and PhD from the Royal College of Art and has exhibited and published internationally. Teichmann’s first solo museum show, Mondschwimmen, opened this June at Zephyr –Reiss-­‐Engelhorn-­‐Museen Mannheim, with an accompanying publication of short stories and works by the artist. The exhibition is made up of video installations, sculptural and photographic works, which include large-­‐scale painted backdrops. An event with a string quartet performing a composition by Deirdre Gribbin, created for one of the film installations, as well as readings by the art historian and author Carol Mavor was held in conjunction with the show.

Recent group exhibitions have included In Appropriation at the Houston Centre of Photography, curated by Aaron Schuman, The Constructed View at the Dong Gang Museum of Photography in South Korea curated by Louise Clements and Femina at the Centre d’Art Contemporain, Pavillion Vendome in Paris. In 2014 Esther wasthe recipient of the Levallois Award and the exhibition Fractal Scars, Salt Water and Tears was shown in Paris and London. Her work is featured in important survey publications including In Our World edited by Filippo Maggia, 100 New Artists edited by Francesca Gavin, Laurence King and Phaidon’s forthcoming Looking at Photographs by David Campany. In 2014 Self Publish Be Happy published her work as their Book Club Volume V.

In 2013 Esther was a guest professor at the California College of the Arts in San Francisco and is a Senior Lecturer at the University of the Arts London, London College of Communication and visiting lecturer at the Royal College of Art. In 2015 Teichmann received a six month funded research sabbatical from LCC and created new works in Australia, the Amazon and the United States. Esther is currently working on a two-­‐volume book of her images and writing (forthcoming by Stanley/Barker).

Seaweed has been used as food and fertiliser  in Ireland for more than four thousand years. Historically gathered mainly by women, these nutrient-rich ocean plants supplemented diets  of the impoverished along the coastal region, especially during the mid 19th century Great Famine. Ellen Hutchins (1785–1815) was an Irish botanist specialising in mosses and seaweed. Her detailed botanical watercolour illustrations and meticulous specimens of dried algae are held in the archives  of the Royal Botanic Gardens in Kew, bequeathed  to Dawson Turner, the premier Victorian English botanist at Kew, with whom Ellen exchanged letters for several years sharing their research and mutual obsession with seaweed. Anna Atkins (1799 – 1871) was an English botanist, the first artist to publish a photo book and the first female photographer. Two family acquaintances, William Henry Fox Talbot and John Herschel, were developing early photographic processes and taught Anna their inventions. Thus Atkins discovered the cyanotype, camera-less sun printing, which she would use to record all the specimens of algae found in the British Isles. As Teichmann drove and walked through southern coastal cities and villages, climbing across rocks to gather seaweed,  she thought of these women. She thought of the ones whose names are unknown, the gleaners, wandering the coast in search of their ocean harvest, feeding their families with the sea, the outside entering their homes with its salty smell. Walking and looking, each wet strand she picked up was different from the next. Teichmann thought of the botanist and artist and camera-less photographer, who would have known each plant’s name and properties. Walking without destination, tracing the water’s edge until the last light went, carrying the now heavy bag of wilderness on her back, strange now removed from the water.

Rik Moran is a London-based documentary photographer focused on environments and spaces, the memories that inhabit them, and the residual stories and emotions left behind. He’s studied at Central Saint Martins in London, alongside a lengthy career in design and advertising and his work has featured in The Guardian, The Modernist, The London Society Journal and Umbrella magazine amongst others.

He’s been celebrating the hidden, untold and underdog aspects for over 20 years. He uses photography to document his view of the world and to make sense of what crosses his path, articulating the underlying feelings of locations, that exist beyond the usual and the well documented. His Flâneurism project is a celebration of the unseen, hidden and uncelebrated. Exploring the cul-de-sacs and avenues of life, the aim is to join the dots between the coincidences and topologies of the world via successive photographic posts and physical printed photobooks.

Online since 2014 with a large archive of photography from locations as far and wideas Tokyo, Bogota and Moscow, the books launched in August 2015, with three publications from Athens, Moscow and the Heygate Estate in South London.

Each edition is based around a single location, city or town with an underlying thread exploring the stories and history present within.

Three new editions launched in February 2016. There’s a broad theme of flourishing in the face of adversity running throughout. The death knell of gentrification may be a rallying cry for many to put down their mochaccino and click ‘like’ or ‘share’, but for every online petition, there’s a place prospering despite all odds. The regenerated White City in Tel Aviv, the ever-resilient Soho and Coney Island’s long-running resistance to development, are just three such stories.

What is it that makes us suspend belief in reality and place our faith in systems beyond our control? The same type of faith that once led people to build mighty houses of worship, more recently led others to believe in ever increasing house prices.

The most expensive houses in Dublin sit chained up and empty, whilst housing crisis related suicides are at an all time high. Huge tech businesses head quarter themselves here, yet contribute little to the economy. It’s little wonder people seek solace in religion, or substances, shopping and gambling. Unscrupulous developers continue to pro t in the misfortune of the desperate, fuelling boom to bust and back again.

Those of us lucky enough to be on the ladder, worship at the altar of property prices, entrusting our security and future in the matrices of mortgages, entrenched in the belief that equity will lead to enlightenment come the day of reckoning.

Over four days Moran walked from mansions to multi-stories, corporate headquarters to council estates, and the paths and streets in-between. He set out to understand how the faiths and beliefs of the city interact with their surroundings, and what return they offer to those invested in them.